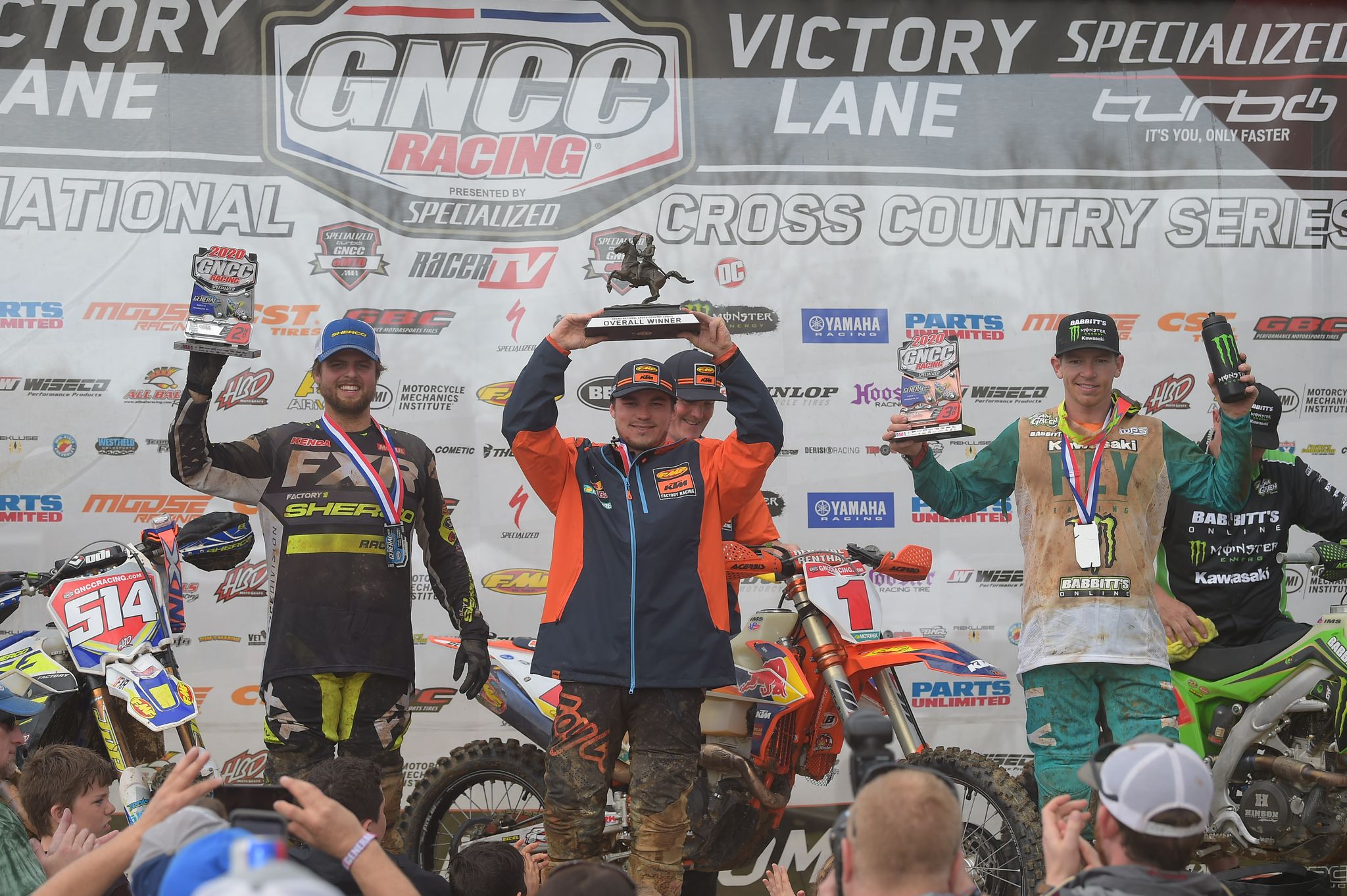 WASHINGTON, Ga. (March 16, 2020) – Round three, The Specialized General, of the Grand National Cross Country (GNCC) Series presented by Specialized, an AMA National Championship, concluded yesterday in Washington, Georgia. After an intense battle throughout the duration of the race it was FMF/KTM Factory Racing’s Kailub Russell coming through the finish line first.

Russell would have his work cut out for him after a mid-pack start, and coming through timing and scoring fourth on the first lap. K. Russell made his way into the lead as they came around on lap four, but FactoryONE Sherco’s Steward Baylor Jr. would remain close. Baylor Jr. battled back-and-forth with K. Russell the entire last lap, swapping the lead position multiple times. As the duo made their way to the motocross track portion of the track, K. Russell would find an inside line and make the pass stick.

Babbitt’s Online/Monster Energy/Kawasaki’s Josh Strang came through the pack to earn third overall on the day. Strang came through sixth on the opening lap, but would put his head down and push throughout the entire three-hour race. Strang currently sits second in the National Championship points standings after three rounds of racing.

After grabbing the $250 All Balls Racing XC1 Holeshot Award Coastal Racing Husqvarna’s Ricky Russell would finish fifth in XC1 and eighth overall on the day. Russell would battle with Baylor for fourth throughout the race, but would fall behind on the last lap. Russell holds onto third in the points standings after three rounds of racing.

Babbitt’s Online/Monster Energy/Kawasaki’s Jordan Ashburn would come through leading the way on lap one. As the race wore on Ashburn continued to fight for a top spot, but would fall back to sixth in XC1 and ninth overall.

Sitting seventh for majority of the day was Phoenix Honda Racing’s Andrew DeLong. DeLong had a consistent race in Georgia, and would come through the finish line seventh in his class and a 12th place overall finish. AmPro Yamaha’s Layne Michael came through eighth in his class and 15th overall. Michael had a decent start to the day coming through fifth on the opening lap. Michael would try to battle back after falling back to eighth, but would ultimately end his day there.

Rounding out the top 10 in XC1 Open Pro were Levi Keller and Rockhill Powersports/Ti Dezigns/UFO Plast’s Evan Earl. Keller and Earl would engage in a battle on the last lap to see who would come through first at the checkered flag.

Round three saw another new winner in the XC2 250 Pro class. It would be Rockstar Energy/Factory Husqvarna Racing’s Craig DeLong coming through to earn his first XC2 win of the season, while also coming through fourth overall on the day. Trail Jesters KTM’s Jonathan Girroir would battle for a second place finish in XC2, and holding onto the class points lead. AmPro Yamaha/St. Lawrence Radiology’s Mike Witkowski rounded out the XC2 podium with a third on the day.

Coming through to earn the FMF XC3 125 Pro-Am class was Raines Riding University/Atlas Sales/Yamaha’s Jason Raines. Raines would lead the race from start to finish, putting over a 2 minute gap on the rest of the class. Ohlins USA/Brewer Cycles/FXR’s Cole Mattison battled through the pack to earn second in his class, followed by points leader Moose Racing/Carolina KTM/XC Gear’s Zack Hayes rounding out the top three.

At the conclusion of the 10 a.m. race it was WXC competitor, BAB’s Racing Yamaha/Maxxis’ Becca Sheets coming through to take the overall win and her third-straight WXC class win. Sheets had her work cut out for her as she came through fourth on the opening lap. Sheets would put her head down and push as she made her way into the lead on lap three. On the final lap Sheets would push and finish with a 21 second gap back to second place.

Grabbing the $100 Trail Jesters Holeshot Award was Enduro Engineering/MEPMX/Fly Racing/KTM’s Mackenzie Tricker. Tricker would battle for the lead, but would remain in the second place position as the checkered flag flew. Coming through to earn third in the class was Rockstar Energy/LanMills XC’s Tayla Jones. Jones would battle throughout the race, but would remain in the final spot on the podium.

At the conclusion of the 8 a.m. youth race it was Team Green Kawasaki’s Jack Joy taking his first overall win. Joy would battle with fellow Team Green Kawasaki’s Grant Davis throughout the entire race, swapping the lead multiple times. Davis would hold on for second overall in the youth, with KTM’s Caleb Lane rounding out the overall podium and YXC1 Super Mini Sr. class top three.

Georgia’s David Parsons was nominated by his wife for GNCC’s Moto Hero Award, and on Sunday during the 10 a.m. start he was awarded with the Moto Hero plaque and a FREE set of Greenball’s premium light truck Kanati brand tires valued over $1,000 courtesy of GBC Tires. Parsons retired from the military in 2007, but still helps train different active and reserved military branches. During his time in the military Parsons was deployed to Desert Storm, and many other countries. Thank you David for your service, we are proud that you are a part of our GNCC Racing family.

The 1 p.m. bike pro race was broadcast LIVE in its entirety on RacerTV.com and can be viewed as archived video online by visiting the GNCC LIVE page online. Two highlight shows featuring ATVs and motorcycles will be featured on MAVTV.

The Specialized General
Washington, Georgia
Round 3 of 13
Sunday, March 15, 2020