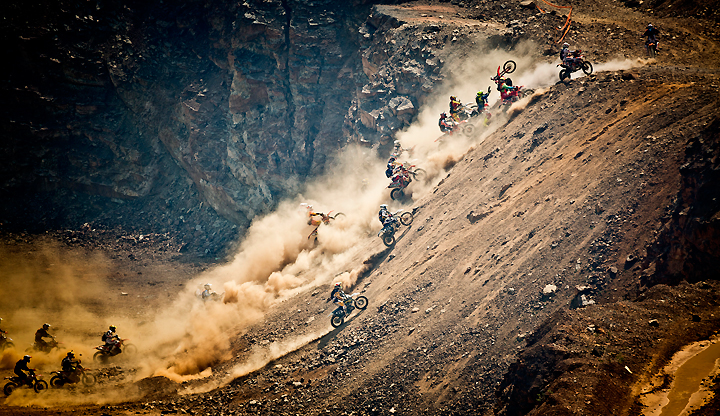 Hard Enduro spotlights are watched with passion day by day.

In the war of machines and people, now moving the roads. New hard enduros places appear every year and many countries try to host the toughest races. Each of these races we share with you marks a different feature:

The Erzberg Rodeo and its featured race, the Red Bull Hare Scramble, is the event that put extreme off-road racing on the modern-day map. Erzberg has set the standard for extreme events everywhere, making it our undisputed number-one pick.

You’ve likely seen many photos and videos of the infamous Erzberg Hare Scramble, but what you might not know is that the Erzberg Rodeo is a lot more than an extreme race. It is a four-day dirt bike festival in the Austrian mining town of Eisenerz, and for many, a non-stop entertainment. The “Iron Road Prologue” gets things started with hundreds taking part in the road-race Hillclimb to the top of the “Iron Giant.” Other events like the Rodeo-X (Endurocross-style night race) and the Rocket Ride (drag race Hillclimb from the bottom of the mine pit) give riders of all levels limit to participate in. And of course, the Festzelt (beer tent) is the focus of the nightlife.

The Red Bull Hare Scramble is the final event of the Erzberg Rodeo, and continues to be one of the toughest extreme races in the system, with crazy climbs, sections like “Downtown” and “Carl’s Diner.” Only a few riders typically make it to the finish before timing out.

Whether you’re a pro racer, an amateur, or even a racer at all, put Erzberg on your bucket list!  It’s an extraordinary event from all aspects, and an experience we highly suggest!

The Red Bull Romaniacs is another event that has long been a fixture on the world extreme enduro exhibition. Romaniacs takes place in the heart of Transylvania in Sibiu, Romania, and it was this event that started the wild urban spectacle of manmade obstacles through the city streets as the prologue.

Riders face four days of extreme rally-style racing, where riders navigate using GPS as they wind their way through the gnarled woods and steep slopes of Transylvania, though in recent years the course is also marked.

The event is now heading into its tenth year in 2017. Along with the Gold class of the elite riders, there are also Silver (expert) and Bronze (hobby) classes.

Check out all year events.

One look at the beautiful Turkish Riviera and you’ll know why Red Bull Sea to Sky is called “the most enjoyable extreme enduro.”

Beginning from the Mediterranean beach of Turkey’s southern coast and heading into the forest before heading up Olympos Mountain, Sea to Sky has a little of everything mashed into three days. The beach race that takes place on the sand in front of Kemer village serves as the prologue for the next day’s forest race. Scenic single-track and river crossings take riders through the woods, with results determining the start for the final Olympos Mountain Race.

It might sound like a refreshing vacation, but the demands on the racers are plenty, primarily on day three where riders head up the mountain. As riders make their way skyward, the lush landscape begins to melt away and nothing but rocky, sun-scorched slopes remain. The race culminates at the very peak of Olympos Mountain at an energy-sapping 7700 feet.

We wanted to present an honorable mention to the longest-running extreme endurance race in the world a race you may or may not have ever heard of. Novemberkasan is an annual Swedish event that takes place during you guessed it November and has been going on since 1915. Although of the terrain, battling wintery Nordic conditions in the dark (yeah, not much daylight that time of year) is extreme in itself.

Novemberkasan has slowed to a simmer in the past few years, with the field now limited to 200 riders, most of whom reach the finish fairly easily. Riders complete one lap during the day and then complete another two laps at night. The Kasa (trophy cup) is awarded when a rider wins the event three times.

The Red Bull Hixpania Hard Enduro is an event on the calendar, but it made the list on account of its technical characteristics and creativity. The three-day event is the first extreme enduro to take place in Spain, and the inaugural 2016 event was appropriately won by Spain’s own Alfredo Gomez.

Day one is an urban EnduroCross-style night race called the Medieval Bull Run through the streets of Aguilar de Campoo in Palencia, Spain. Day two is an off-road loop, the Enduro Campoo X-treme, with qualifying riders taking part in the final “The Lost Way” scramble-style main event, which takes place in an industrial quarry.

This Brazilian event just recently took area in Belo Horizonte in Southeast Brazil. The steep hills of the mountainous jungle terrain set the stage for what was shaping up to be a fantastic battle between Graham Jarvis and Cody Webb. Rocky ridges, near-vertical climbs, the “Grand Canyon” section, and what Webb called “the scariest bridge I’ve ever done in my entire life” made up the course.

Possibly, some complications arose during the event, which caused it to be settled two days early. Red Bull promoters cited “environmental concerns” as the reason for the cancelation, but sources say that locals and authorities made efforts to halt the race each day of the event, citing some alleged violations, even though all permits were in order.

The AMA Tennessee Knockout is the lone American race on our countdown. “TKO” as it’s called takes riders into the Tennessee outback for an elimination-style race. The court is whittled down with each round, and the course becomes increasingly difficult. The rolling hills of Sequatchie, Tennessee are littered with rocks, roots, and slippery rocks, and riders are also challenged by the August heat and humidity.

While there are a few other budding extreme off-road events in the U.S., TKO is the only true world-class event in the eyes of the pros. With every year it is drawing more international riders, making the prestige even bigger for American riders eager to take a global win on home soil.

For its stunning landscapes alone,  deserves a solid spot on our list. It is also one of the longest-running rally races in motorsports, reaching back decades to when it was a car race. The Roof of Africa takes place in Maseru, Lesotho, a kingdom landlocked within South Africa. Historic and scenic, this rally-style event is also as extreme as they come, demanding every ounce of strength from riders as they face mountain after mountain, one insane mounting after another for three days and 250 miles.

The course is somewhat marked, but riders have to rely on GPS to stay on track. Racers also have to be careful with their equipment, as a damaged bike or broken equipment could not only end their race but leave them stranded in the African wilderness.

It’s as breathtaking in scope as it is in the scenery, making “The Roof” more like a treacherous hybrid of endurance racing and extreme enduros.

Graham Jarvis described Ales Trem as the hardest day’s riding he’s ever done—there’s little more we want to know to put it among the top-10 extreme enduros in the world.

This French event is fairly new on the scene, having run its third edition in 2017, but its steadily increasing level of difficulty has quickly made it world-class, surpassing other notable European events like Hell’s Gate and The Tough One that is dwindling in popularity.

Ales Trem starts with a prologue in the city streets in downtown Ales, France, and then takes to the neighboring mountains for an elimination-style event. The January event also makes cold a bit of a factor, but it might be an advantage to the riders as they wrestle their bikes through rocky gorges and root-crossed slopes.

Hard enduro in Portugal might be most famous for its prologue, even stronger so than its off-road main event in the Lagares Mountains. In the prologue, racers take to the narrow cobbled streets of Porto, a coastal city in northwest Portugal, and race up and down the steep steps and narrow walkways of the historic seaside city.

The XL Lagares prologue is an experience in itself, and the onboard footage from multi-time winner Alfredo Gomez is worth a watch as he storms Porto like an urban rally course.