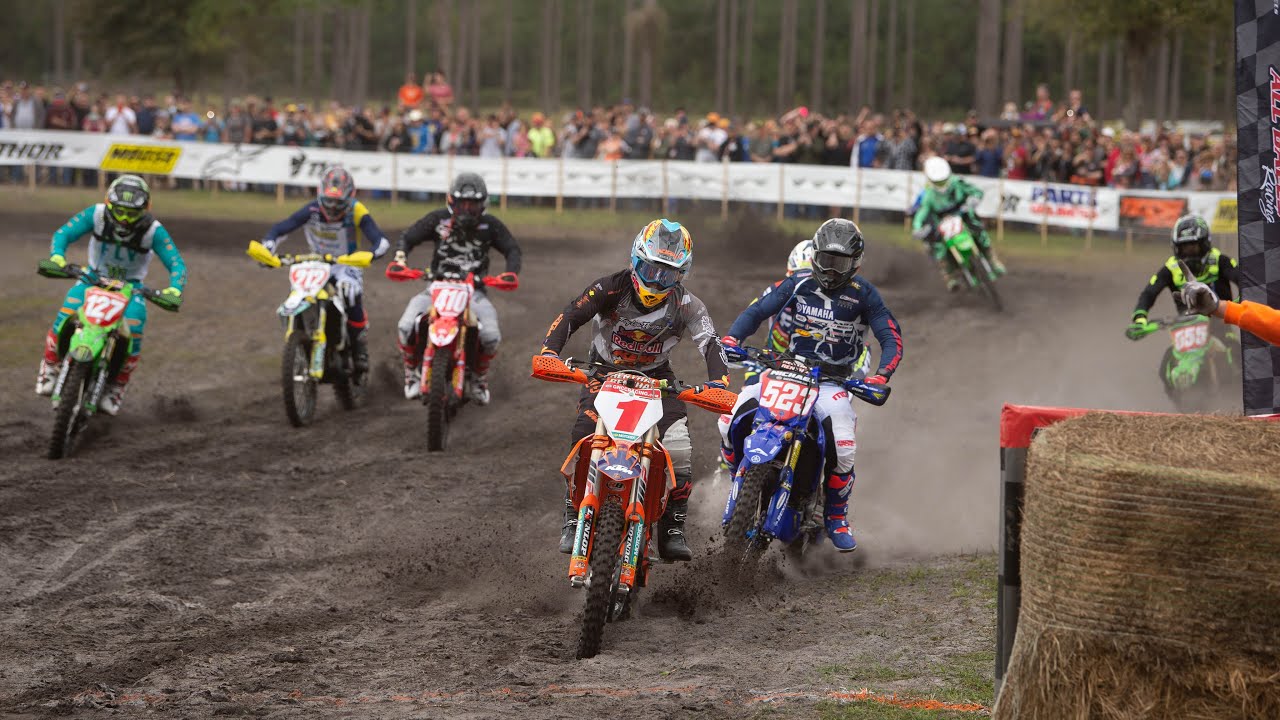 Round two, Moose Racing Wild Boar, of the 2020 Grand National Cross Country (GNCC) Series presented by Specialized, an AMA National Championship, concluded on Sunday, March 9, 2020. FMF/KTM Factory Racing’s Kailub Russell came away with his second consecutive win of the 2020 season, and his fourth win in the state of Florida.

As the race got underway it was K. Russell jumping out to grab the All Balls Racing $250 XC1 Holeshot Award. K. Russell would set the pace, and begin to place a gap over the rest of the field. By the halfway point of the race Russell would have over a minute lead, and as the checkered flag flew K. Russell would capture the win by over two minutes.

Babbitt’s Online/Monster Energy/Kawasaki’s Josh Strang worked his way through the pack of hungry XC1 Open Pro riders to claim second overall. After a dead last start in the class, Strang would have his work cut out for him. On the opening lap Strang would come through timing and scoring in the eighth place position, but he would put his head down and begin chipping away. As the white flag came out Strang was up to third overall, but he wasn’t done there. He began to apply the pressure to second, and would make the pass stick just miles before the checkered flag.

Coming through to take third overall in the Florida sand was Coastal Racing Husqvarna’s Ricky Russell. After starting the race mid-pack, Russell began to charge and start making passes towards the front. Russell would battle his way up to third and then second by the fourth lap. However, a charging Strang was behind him and ready to battle throughout the entire last two laps. Russell would be unable to hold him off on the final lap, and just a couple corners away from the finish would suffer a crash. However, Russell would be able to remount his motorcycle without losing too much time and take the checkered flag.

As the riders made their way around on the opening lap it was Babbitt’s Online/Monster Energy/Kawasaki’s Jordan Ashburn holding onto the second place position. Ashburn would battle for second half of the race, swapping the position multiple times. As Russell and his teammate, Strang, began to turn it up during the second half of the race Ashburn would find himself back in fourth. Ashburn put his head down and kept pushing, holding onto fourth overall on the day.

Phoenix Honda Racing’s Andrew DeLong would come through fifth in the XC1 Open Pro class, and eighth overall after three grueling hours of racing. DeLong would battle back after a seventh place start on the day, moving his way up to take home a top five finish in XC1.

Visiting from the United Kingdom was AmPro Yamaha/Dragon Tek/St. Blazey MX’s Todd Kellett. After starting back in the ninth place position it didn’t take long for Kellett to find his groove against his fellow competitors. Kellett would move into the sixth place position in XC1 and remain there until the finish. Overall Kellett finished 10th at the Wild Boar GNCC.

After a fifth place starting position, FactoryONE Sherco Grant Baylor would find himself back in 10th for the middle half of the race. G. Baylor would work his way up to eighth as the checkered flag flew, after a day full of battles at round two of the 2020 GNCC season.

Rounding out the top 10 in the XC1 Open Pro class were Rockhill Powersports/Ti Dezigns/UFO Plast’s Evan Earl and AmPro Yamaha’s Layne Michael. Earl would battle back from an 11th place start to the day to come through ninth in his class. Michael would start out at the front of the pack battling for the first half of the race. However, Michael would fall back to eighth and then ultimately 10th in his class to finish out the day in Florida.

For FactoryONE Sherco’s Steward Baylor Jr. he would have bad luck strike him this round, as he was only able to complete one lap of racing. Baylor Jr.’s bike would suffer a mechanical issue as he headed out on the second lap of racing. Baylor Jr. and his crew would work to try and get the machine into working condition, however, would ultimately be unable to get it running again. Coming into round three, Baylor Jr. sits ninth in the points standings.

Earning his first-ever XC2 250 Pro class victory was Trail Jesters KTM’s Jonathan Girroir. At the halfway point Girroir would make the pass for the lead and not look back. He would focus on trying to place a gap over the rest of the field, and better his overall finishing position. Girroir would come through to take his first win by 25 seconds.

Round one’s XC2 winner, AmPro Yamaha/St Lawrence Radiology’s Mike Witkowski made his way into the lead early in the race. Witkowski would lead the first half of the race, falling back to second after the third lap of racing. Witkowski remained focused and would try to make a comeback and overtake that number one spot once again. However, time would expire and Witkowski would come through second in the XC2 250 Pro class. As the Witkowski and Girroir head into round three, they are currently tied in the points standings.

Making the move over to the was Rockstar Energy/Factory Husqvarna Racing team was Craig DeLong. With a limited preparation time, DeLong would find himself battling back from a mid-pack starting position. DeLong made the necessary passes as the race wore one, and found himself sitting third in the class within striking distance of second. DeLong made the move to second as the white flag came out, but Witkowski was on a mission and would make the pass back into second before the finish line. DeLong rounded out the XC2 class podium in third, and a seventh overall finishing position.

It was Moose Racing/Carolina KTM/XC Gear’s Zack Hayes taking home his second-straight FMF XC3 125cc Pro-Am class victory at the Wild Boar GNCC. Hayes would come through 10th on the opening lap of racing, but would begin picking off the competition one-by-one as the race wore on. By the time the white flag flew, Hayes found himself sitting in second and within striking distance of first. When the checkered flag flew, it was Hayes coming through to take the win.

Husqvarna/FXR/Enduro Engineering’s Jake Froman made his way into the second place position on lap four, and would battle throughout the remaining laps to hold onto his podium finish. Larsons Cycles/Fly Racing/Shoei Helmets’ Nathan Ferderer also made his way onto the FMF XC3 podium with a third in the class.

Phoenix Honda Racing’s Brody Johnson brought home his second-straight Top Amateur honors award with a 19th overall and first in the 250 A class. Coming through second as top amateur and first in the Open A class was Chase Hayes with a 32nd overall finishing position. Earning second in Open A and third as a top amateur was Alex Lugar with a 33nd overall finishing position.

In the WXC class during the 10 a.m. race it was BABS Yamaha Racing’s Becca Sheets coming through to earn her second-straight overall and WXC class win for 2020. Sheets didn’t get off to the greatest start, but she managed to move herself into the lead early on in the race and pull a gap against the rest of the group. Sheets would end up crashing into palmettos and would be forced to push herself once again to regain the gap she had before. Sheets would cross the finish line first, 58 seconds ahead of the competition.

Rockstar Energy/LanMills XC’s Tayla Jones had a come from behind story in Florida. Jones had a mechanical issue before the start of the race, forcing her to pull to the sidelines as the other WXC riders took off. As the problem was fixed Jones took off behind the Sportsman A riders, working her way through the pack she began to pick off riders one-by-one and steadily move up through the ranks. Jones made her way up to the second place position by the time the checkered flag flew, making it her second-straight second place finish.

Coming third in the WXC class was KTM/Enduro Engineering/Fly Racing/MEPMX’s Mackenzie Tricker. Tricker and Sheets would battle back and forth for majority of the day, as Jones closed the gap on them. Tricker would be unable to hold off Jones, but would manage to earn the last podium position in Florida.

In the 8 a.m. you race it was Team Green Kawasaki’s Grant Davis coming away with another overall youth and YXC1 Super Mini Sr. class win at the Wild Boar GNCC. Coming through second was fellow Kawasaki competitor, Jack Joy also earning second in the YXC1 class win. Follow them was KTM’s Trevor Colip earning third overall in the youth race and in the YXC1 class.

In the YXC2 class it was Andrew Segars earning the win, as well as fifth overall in the youth race. Racing to a second place in YXC2 was Nicholas Defeo followed by Owen Barnes earning third in the class.

The 1 p.m. bike pro race was broadcast LIVE in its entirety on RacerTV.com and can be viewed as archived video online by visiting the GNCC LIVE page online. Two highlight shows featuring ATVs and motorcycles will be featured on MAVTV.

The 2020 GNCC Season heads to Washington, Georgia for The Specialized General GNCC next weekend, March 14 and 15.  ATV Racing will kick off on Saturday, March 14, followed by motorcycle racing on Sunday, March 15. To find out more on this event, click HERE. Additional Camping Fees apply at this round.