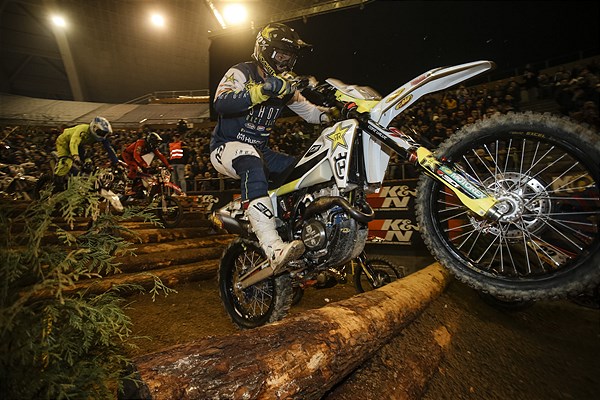 Delivering a riding masterclass, Rockstar Energy Husqvarna Factory Racing’s Billy Bolt claimed a hat-trick of victories at round three of the FIM SuperEnduro World Championship in La Coruna, Spain. Also topping the Superpole hot lap, Bolt secured a maximum points haul to return to the top of the championship standings with two rounds remaining. Despite a difficult home round, Spaniard Alfredo Gomez battled hard throughout the night to take fourth and maintain fourth overall in the series.

Disappointed with his performance last time out in Germany, Bolt arrived in Spain eager to make amends and deliver a redeeming result. On what was an increasingly slippery and technical course, the Brit looked in command as he rode his Husqvarna FE 350 to victory.

Beginning his night with a blisteringly fast Superpole lap, Billy topped the classification by almost two seconds. Carrying that momentum into the first of the night’s three races, the Brit quickly hit the front of the field on lap two and was never headed. Controlling the race throughout, Bolt claimed the win with a confidence-boosting 11-second margin of victory.

Starting from the back of the grid in the reversed start order race two, Billy again worked his way into the lead on lap two. Despite a couple of mistakes in heavy traffic, he kept his cool to take the win. With a clean sweep up for grabs, Bolt duly delivered in the third and final race of the night. After an early battle with rival Jonny Walker, Bolt took the lead on lap four. Racing clear and opening up a sizeable 32-second advantage he took the win, comfortably claiming the top step of the podium and with it the championship leader’s red plate.

Looking forward to making a good impression on the leaderboard at his home round, Alfredo Gomez didn’t quite have the night he was hoping for in La Coruna. Despite placing third-quickest in the morning’s timed practice, a crash during his Superpole hot lap qualified him in sixth. Faced with a disadvantaged grid position for races one and three, the Husqvarna rider fought to make the best of his situation on his TE 300i.

Fourth in race one and fifth in race three, the Spaniard secured his best result of the night when grid positions were reversed for race two. Capitalising on an outside start, he exited the second corner in fourth position. Finding a strong rhythm, he placed an impressive third to show what could have been if Superpole had gone his way.

The FIM SuperEnduro World Championship continues with round four in Budapest, Hungary on February 1, 2020.

Billy Bolt:“I’m made up by just how well tonight has gone. It’s the first time I’ve won all three races and taken the Superpole, so all in it’s gone about as perfect as it could have done. After my performance in Germany I wanted to come here and redeem myself. But to be honest, when I walked the course I didn’t expect it to suit me so well. However, as the night progressed I adapted to the changing terrain and conditions. You needed to muscle the bike around in places, but at the same time be calm and patient. I did my best to avoid mistakes and take the opportunities when they came to me. It worked, especially with race three – that felt perfect. Of course there’s still a long way to go in the championship, we’re far from over, but to take maximum points and get the leader’s red plate back is fantastic.”

Alfredo Gomez:“I made things difficult for myself when I crashed in the Superpole and ended up sixth. That meant I had a poor gate position and it was difficult to fight in the first corner. In race one I started seventh and recovered to fourth. I managed to capitalise on the reversed grid for race two and exited the second corner in fourth. I found my rhythm pretty quick and took third there. With fifth in race three I ended up fourth overall, but I showed in race two that with a decent start my pace was good.”