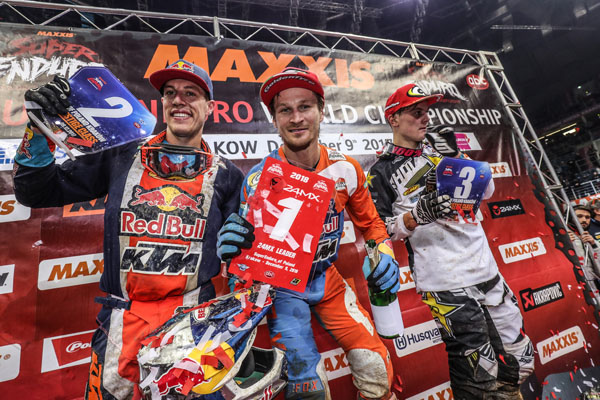 The new season of SuperEnduro started in style… it was an overwhelming reception in the Tauron Arena for the opening round of the 2018 season of the Maxxis FIM SuperEnduro World Championship. The 12,000 Polish spectators were thrilled by the exploits of the 75 riders entered from 22 nations, which is a record in the short SuperEnduro history. And of course all eyes were on local rider Taddy BLAZUSIAK (PL – KTM) who has already achieved his amazing comeback.

From the SuperPole “powered by Akrapovic”, the Factory KTM rider proved that he has kept his speed by setting a remarkable time while Alfredo Gomez (E – Husqvarna) and the promising youngster Billy BOLT (GB – Husqvarna) were caught out by the tricky track. And while he had only achieved the 7th lap time, defending champion Colton HAAKER (USA – Husqvarna) won the Super Pole and scored his first three points of the season.

But the Californian could not take advantage of his excellent time, and during the first final he made a mistake in the first corner… an opportunity that the crafty “fox” BLAZUSIAK was not going to miss; he took to the head of the field in Prestige category in front of a wild crowd. Meanwhile his main rivals like GOMEZ, WEBB (USA – KTM) and WALKER (USA – KTM) were stuck in the pack. But Cody WEBB started a superb recovery and overcame the fight offered by young guns LETTENBICHLER (D – KTM) and Billy BOLT (GB – Husqvarna) who managed a remarkable start to the race. WEBB was focused on BLAZUSIAK and took control of the race before crashing in the terrible Matrix. But the American was decidedly too strong to let this mistake hamper him, even from back in 7th position he gave no chance to his rivals, including an excellent BLAZUSIAK who just saved second place on the final obstacle ahead of a very strong Alfredo GOMEZ!

The second final with a reverse order start was incredible… while all the ‘Top Guns’ piled up and got stuck on the first corner, the “wiley old fox” Taddy BLAZUSIAK carved his way through and surprised everyone, taking with him an amazing Alex SALVINI (I-Beta) and the young “rookies” LETTENBICHLER and BOLT. And it was this last one who would create the surprise of the night, because after blasting past the German rider and SALVINI, he began to hunt down Taddy BLAZUSIAK who was starting to show signs of fatigue at the start of the last lap. And the insatiable Billy BOLT, took the fight to the local rider much to the chagrin of the home fans! The 2016 Junior Champion, Manuel LETTENBICHLER completed the podium in this 2nd final in front of a remarkable Danny MCCANNEY (GB-Gas Gas) and Cody WEBB who salvaged points by finishing 5th, while Colton HAAKER could not do better than 8th.

The two-time World Champion however managed a great start in the 3rd final where he showed a glimpse of what is to come by scoring a reassuring 3rd place … but meanwhile Taddy BLAZUSIAK had already charged on ahead! Urged on by a delirious crowd, the six-time World Champion flew into the lead, while Cody WEBB was stuck in the pack once again, and had to begin a new fight back. The Factory KTM rider from America proved to have the most pace on the track here in Krakow and he started the last lap within two seconds of BLAZUSIAK, ready for an epic final. The pair were shoulder to shoulder in the last corner where the US EnduroCross Champion managed to force his way to the chequered flag. Billy BOLT offered up a good 4th place and he is certainly the leader of the “new generation”…

But with three second places it was Taddy BLAZUSIAK who scored the most points in the Tauron Arena, and he received the 24MX-sponsored leader’s plate as he takes the head of the championship by two points from Cody WEBB. Billy BOLT completed the podium in front of LETTENBICHLER, an excellent 4th, and Alfredo GOMEZ (5th) who will likely make progress over the next few races as he gets acquainted with his Husqvarna. Disappointments on the other hand for Colton HAAKER (6th) who lost big points here in Poland despite his SuperPole, and also Jonny WALKER who is only 8th provisionally. On the other hand, promising signs came from the EnduroGP riders with Danny MCCANNEY 7th while he gets used to his new Factory Gas Gas and Alex SALVINI a solid 9th. A battling Cristobal GUERRERO (E-Yamaha) completed the Top 10.

Another South African to the forefront…

With a completely modified platform the Junior category offered us a great set of races with several revelations and three different winners of the three races. The German Kevin GALLAS (Husqvarna) pocketed the first final, while Emil JUCSZCZAK (PL – Sherco) also thrilled the audience in Krakow with a surprising victory in the 2nd final against his compatriot Oskar KACSMARCZYK – KTM). And it was the young EnduroGP rider, Matteo CAVALLO (I-Beta Boano), who won by a clear margin in the 3rd final; which allowed him a podium overall (2nd) in this opening round of the Championship. But the leader of the Junior Championship is now Kyle FLANAGAN (RSA- Yamaha Neubert) who, thanks to his speed and consistency (6/2/3), snatched the overall Junior lead by two points ahead of CAVALLO, and five ahead of JUCSZCZAK. It’s clear that the young South Africans (GUTZEIT champion in 2017) have a lot of talent!

A quick mention for the European Championship class where Tim APOLLE (D- Husqvarna) triumphed ahead of the Latvian revelation Andris GRINFELDS (KTM) and another Polish rider Mariusz STEFANIAK (KTM), who deprives the young Frenchman Adrien JACON (F-KTM) of 3rd place.

For its second edition in the beautiful city of Krakow, the SuperEnduro has again provided a thrilling night of racing. And the evening was made even more spectacular with the addition of top show (Cheerleaders, Pyrotechnics, Special Effects, Dancers…) to the delight of the 12,000 spectators and 21 television channels which broadcast this event in 106 countries! Add to that the live streaming of EnduroTV and it is hundreds of thousands of spectators who were excited for the opening of the 2018 FIM SuperEnduro World Championship! And the number will certainly grow as we head to the next race on January 6 in Germany for another round of action! Get it in your diaries now!

Taddy BLAZUSIAK: “Obviously I’m happy and satisfied with this result in front of my home fans! It’s amazing to re-live such emotions here in Krakow again 1 year on. I never thought of going back to competition. I tried to cut out riding while remaining involved in the sport but the pull just got stronger and stronger … About my successful start in the second race? I think it’s a question of drive and experience that has often allowed me in my career to avoid the pitfalls of the reverse order start. But one thing is certain this result is still a little unexpected for me, but now I can confirm something: I’ll be ready in Riesa on January 6th to defend my No.1 plate!”

Cody WEBB: “Satisfied with my evening on a tricky circuit with a very soft ground! I know I have speed but I made some mistakes that cost me dearly. Especially during the 2nd final where I wondered if I was going to be able to make up what I lost after the gigantic crash on the first corner! However I started my season well and I am only two points off Taddy. I’m really looking forward to Germany in 4 weeks where I’ll go for the victory!”

Billy BOLT: “I’m a little surprised to be on the podium at this Championship opener with so many prestigious riders out there. But I rode well and the Matrix, where lots of people made mistakes, didn’t cause me too much trouble. Finishing on the podium in Krakow is superb for me and I will continue to work to build on this result! ”