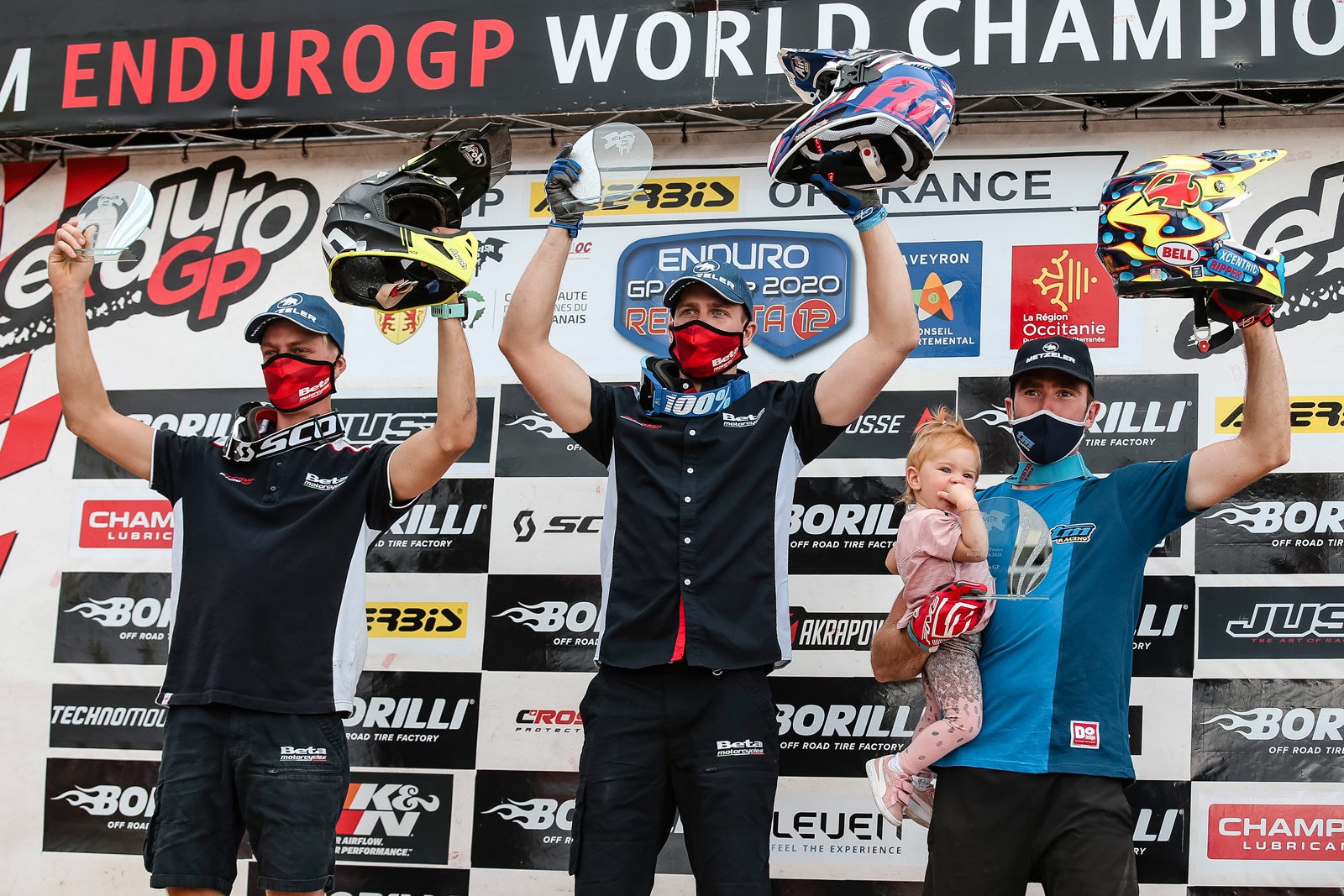 Steve Holcome wins the first day of the 2020 French Enduro Grand Prix ahead of current World Champion Brad Freeman by 2 tenths of a second.

The French Grand Prix, in Réquista, highly anticipated by all Enduro fans after a long postponement due to the Covid-19 crisis, kept everyone on hold on a dusty first day. The riders had fun and gave a show in the three tests created by the Réquista Moto Sports club.

Reigning EnduroGP World Champion Brad Freeman (GB – Beta), who had a somewhat slow start to the day, prepared a crazy last lap to put pressure on his teammate Steve Holcombe (GB). But the 12th rider lost by the slightest margin, with Holcombe’s first EnduroGP class win by an incredible two-tenths of a second. Despite many errors on the last lap, Holcombe impressed throughout the day, even being 18 seconds ahead of Freeman.

Another great protagonist on this first day of the 2020 season was the 2019 Junior World Champion, Andrea Verona (I – TM). The Italian was very fast and led during the last bars of the first lap. He admitted at the end of the day that he is still a bit “green” in the “older” class, making too many mistakes under pressure. However, he secured a brilliant 4th place. Verona was just a second and a half from 3rd place, which was occupied by a very solid Loïc Larrieu (F – TM). The Frenchman woke up this morning with a sore shoulder, but that didn’t stop him from being strong and consistent throughout the day.

For his part, Davide Guarneri (I – TM) shone on his first day back to the Enduro World Championship and achieved an excellent Top 5. Two Betas and three TMs in the Top 5 meant undisputed Italian dominance in terms of manufacturers. Also noteworthy are the good performances of the returning Jérémy Tarroux (F – Sherco) and Jaume Betriu (E – KTM) who joined the 10 fastest riders of the day.

In Enduro 1, Andrea Verona made an emphatic start with a brilliant victory. He edged out much more experienced riders like Thomas Oldrati (I – Honda) and Christophe Charlier (F – Beta), second and third respectively. The last two places in the Top 5 were occupied by Jeremy Tarroux and the promising Antoine Magain (B – Sherco).

At E3, Brad Freeman earned his first win in the category ahead of Davide Guarneri and Jaume Betriu. Antoine Basset (F – Beta) and Marc Sans (E – KTM) were next.

The Junior classes are traditionally one of the toughest in the Enduro World Championship, and the opening round has not disappointed so far. The Requista crowd witnessed a magnificent battle between Ruy Barbosa (CL – Husqvarna), local rider Théo Espinasse (F – Sherco), Roni Kytönen (SF – Honda), Hamish Macdonald (NZ – Sherco), Lorenzo Macoritto (I – Beta Boano) and Wil Ruprecht (AUS – Beta Boano). Upfront, early on, Barbosa finally broke down under the combined pressure of Espinasse, MacDonald, and Kytönen. At the end of the day’s 10 stages, it was the Frenchman, freshly recovered from a torn cruciate ligament, who won Saturday against his Sherco teammate MacDonald and Finn Kytönen. The Chilean had to settle for 4th position while Marcoritto stepped up his game late in the day to break into the Top 5, demoting his teammate Beta Boano to 6th position.