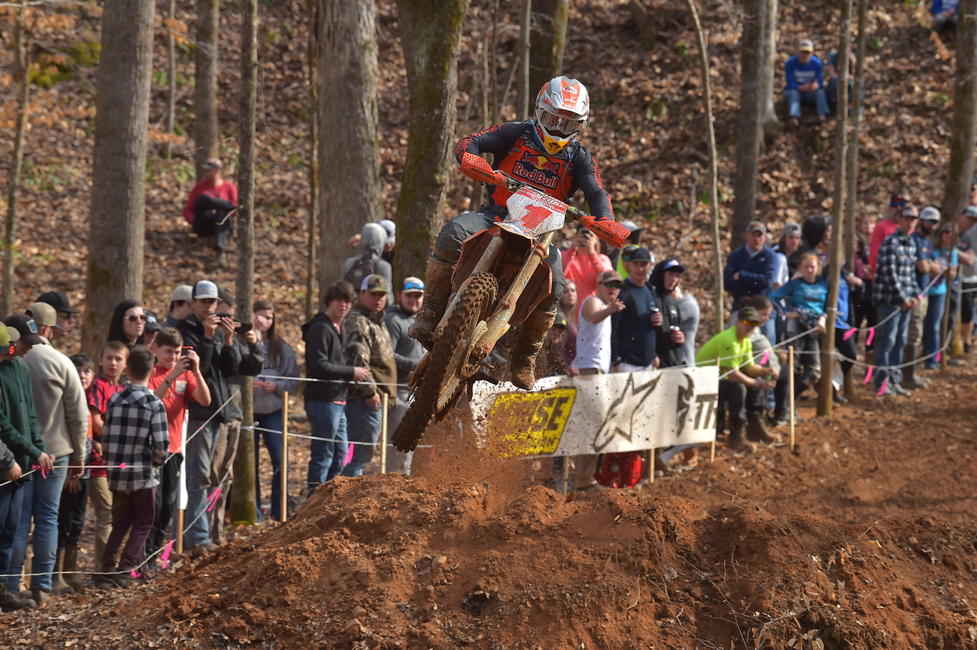 The first round of the 2020 Grand National Cross Country (GNCC) Series presented by Specialized, an AMA National Championship, concluded on Sunday, February 23, 2020 in Union, South Carolina with the 23rd Annual Big Buck GNCC. Cool and partly sunny conditions greeted the final day of racing at round one, making almost perfect racing conditions.

As racing got underway it was FMF/KTM Factory Racing’s Kailub Russell jumping off the line first to grab the $250 All Balls Racing XC1 holeshot award. Russell would lead the race from start to finish, after gaining a lead of over one-and-a-half minutes by the time they completed lap four out of six. Russell would continue to turn the pace up, and by the time the checkered flag flew, Russell would hold a lead of one minute and 51 seconds. Russell earned his 61st career victory, and his last “first-race” win ever.

Coming through in the second place position was Coastal Bi-Con Racing’s Ricky Russell. After completing the first lap of racing Russell was just 1.9 seconds behind the leader, however as the race wore on Russell would fall back to over a minute-gap. Russell remained focused and pushed through the three-hours of racing to earn second overall and a podium finish to start off the season.

Babbitt’s Online/Monster Energy/Kawasaki’s Josh Strang had a strong performance at round one of the 2020 GNCC season. Strang would come through sixth on the opening lap, but by the time the race reached the halfway point he had worked his way into the final podium position. Strang would continue to push, and hold off his fellow XC1 Open Pro competitors, taking home a third overall at the season opener.

Earning fourth overall aboard his new team, and in his home state was FactoryONE Sherco Steward Baylor Jr. Baylor would work his way through the pack after a seventh place start to the day. Baylor looked to be making a late race push, as he came through timing and scoring just 5 seconds behind Strang at the completion of the three-hours.

Taking fifth in XC1 Open Pro and sixth overall was Babbitt’s Online/Monster Energy/Kawasaki’s Jordan Ashburn. After starting the day up in third, Ashburn would battle with his fellow XC1 competitors throughout the entire three-hour race. Ultimately, Ashburn would cross the line three minutes behind fourth place to finish out round one of the 2020 season.

FactoryONE Sherco rider, Grant Baylor, made his way through the pack after coming through tenth on the opening lap of racing. Baylor would continue to pick off riders each lap as he made his way up to the sixth place position in XC1 and seventh overall. Baylor would try to make a last lap charge, but would come through 11 seconds behind Ashburn.

Coming through to earn seventh in XC1 and eighth overall was AmPro Yamaha’s Layne Michael. At the start of the race Michael would hold the fourth place position on the opening lap, and as the race continued on Michael would battle to keep his Yamaha motorcycle at the front of the pack. As the race continued on, Michael came through in the seventh place position at the halfway point and remain there until the checkered flag flew.

After have an extended pit stop after one lap of racing Phoenix Honda Racing’s Andrew DeLong was a man on a mission to get inside the top 10. After coming through timing and scoring fifth on the opening lap, DeLong was forced to remain in the pits for an extended time as him and his team vigorously worked on his motorcycle. DeLong would return to racing, and work his way back to eighth in the XC1 Open Pro class.

Making their XC1 Open Pro debut were Raines Riding University/Ver/Kenda’s Evan Earl and Pilgrim Powersports/Factory Connection/FXR’s Chris Canning. Earl and Canning would finish ninth and 10th in the XC1 class after battling throughout the duration of the three-hour race.

Round one did not go the way Rockstar Energy/Factory Husqvarna Racing’s Thad Duvall hoped for. After grabbing a great start and battling at the front of the pack on the opening lap, Duvall would suffer a big crash. Duvall would make the decision to end his day early after the pain became worse. Duvall’s team has said he will see a doctor this week to further evaluate his injury.

Russell’s teammate, Ben Kelley was also forced to retire from the race early. Kelley came into the season with a pre-existing shoulder injury he suffered last Monday while practicing. Kelley was eager to attempt to salvage points, but the pain was too much to handle. Kelley will also see a doctor to re-evaluate his injury.

Earning his first-ever XC2 250 Pro class win was AmPro Yamaha/St. Lawrence Radiology’s Mike Witkowski. After starting the day off in third, Witkowski would put his head down and go to work on picking off the competition. Coming through timing and scoring on the fourth lap, Witkowski had gained the lead, and would not look back. Witkowski came through one minute and 23 seconds ahead of second, while also finishing fifth in the overall standings.

Making his comeback to GNCC Racing was Trail Jesters KTM’s Johnny Girroir. After missing all but three rounds of racing last year due to health concerns, Girroir proved that he has been hard at work to get back to where he was. Girroir held the lead for the first three laps of XC2 racing in South Carolina, and would then engage in a battle for the lead with Witkowski. Girroir would hold onto second all the way to the checkers.

After battling his way through the pack XC2 class it was Coastal Bi-Con Racing’s Craig DeLong coming through the finish line third in the class. DeLong was not satisfied with his third place finish, and expressed that in his podium interview. However, DeLong continued to close the gap throughout the entire race, crossing the finish line just five seconds behind second.

Taking the FMF XC3 125 Pro-Am class win was Moose Racing/Carolina KTM/XC Gear’s Zack Hayes. After making the decision to race the 125 class, Hayes would have his work cut out for him. After grabbing the holeshot Raines Riding University/Atlas Sales/Yamaha’s Jason Raines made his way to the lead on the second lap. Raines would hold the lead, but when the white flag came out Hayes would make the pass for the lead and hold it until the checkered flag came out. Ohlins USA/Brewer Cycles/FXR’s Cole Mattison would come through in the third place position after a consistent day of racing in South Carolina.

Phoenix Honda Racing’s Brody Johnson would take home the Top Amateur honors at Big Buck on Sunday afternoon. Johnson finished 20th overall, and first in 250 A. Tristan Landrum came through second in 250 A and 25th overall earning second on the top amateur podium. Chase Hayes came through 31st overall, and first in the Open A class earning himself a spot on the top amateur podium.

As the 10 a.m. race started it was Rockstar Energy/LanMills XC Tayla Jones getting the jump off the line first and earning the Trail Jesters $100 WXC holeshot award. Jones would hold the lead on the opening lap, but as the WXC riders came through timing and scoring on lap two it was BABS Racing Yamaha/Maxxis’ Becca Sheets with the lead.

Sheets would hold onto the lead for the remainder of the race, earning the first WXC and 10 a.m. overall win of the season. Jones would cross the line second in South Carolina followed by AmPro Yamaha’s Rachael Archer rounding out the WXC class and 10 a.m. overall podium.

The first Moto Hero of 2020 was awarded to Travis Snelson. Snelson comes from Asheville, North Carolina. Travis has been in the Army for 15 years, and served his country in Iraq in 2010 as an engineer. Today we honored Travis, and thanks to GBC he will be awarded a FREE set of Greenball’s premium light truck Kanati brand tires valued over $1,000.

The 1 p.m. bike pro race was broadcast LIVE in its entirety on RacerTV.com and can be viewed as archived video online by visiting the GNCC LIVE page online. Two highlight shows featuring ATVs and motorcycles will be featured on MAVTV. The first show will air on April 16 at 6:30 a.m. followed by the second show airing on April 23 at 6:30 a.m. To view a full broadcast schedule, click HERE.

The 2020 GNCC Season continues in two weeks with the Moose Racing Wild Boar GNCC in Palatka, Florida. ATV Racing will kick off on Saturday, March 7, followed by motorcycle racing on Sunday, March 8. To find out more on this event, click HERE.