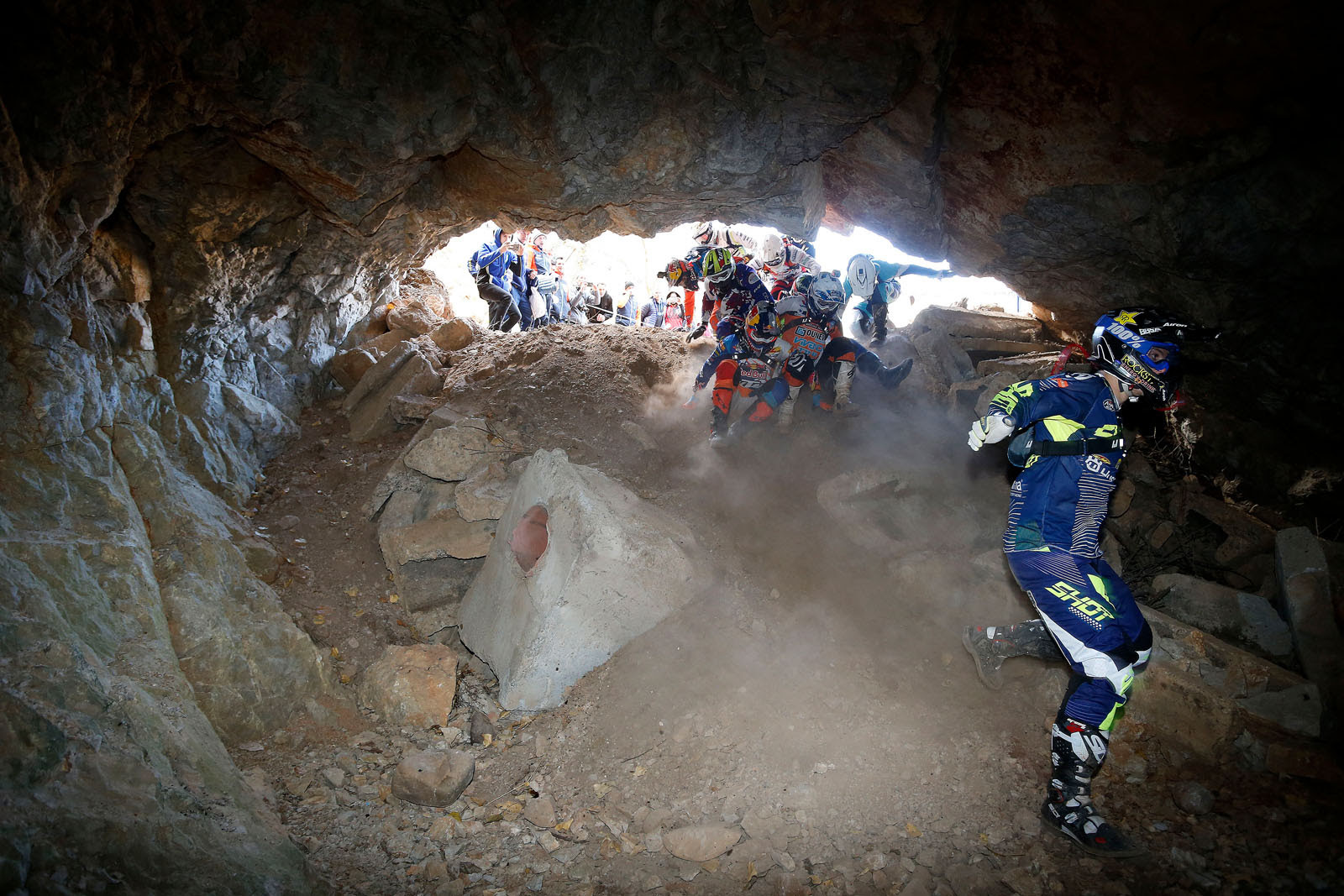 Returning to Hard Enduro, the iconic Erzbergrodeo marked the third stop in this year’s race to become the ULTIMATE ENDURO CHAMPION. The world’s best Enduro riders were among an entry of 1702 competitors (including 49 women) from 43 nations that converged to the quiet mining town of Eisenerz for the annual four-day dirt bike festival.

From the depths of the Europe’s largest iron ore quarry, competitors blasted off the start line for the 35-kilometre long race. With four hours to complete the 27 checkpoints dotted around the Iron Giant, it was Lettenbichler who was first to set the pace, taking over from Garcia and Jonny Walker (KTM – GB) shortly after the start.

Pushing hard, the 21-year-old German tried to break away from the pack, but with 44-year-old Jarvis at his best, Lettenbichler found himself trailing the Husqvarna rider as they entered the notorious Carls Dinner section.

Delivering a master class in the monstrous boulder garden, Jarvis broke clear of Lettenbichler in second, while the Sherco pairing of Roman and Wade Young (RSA) were locked in a tight battle for third.

However, Lettenbichler – chasing his debut win – was undeterred and worked hard to reel Jarvis back in, drawing level at Green Hell with just four checkpoints to go. But Jarvis had a little energy in reserve to keep the youngster at bay and secure a record-equalling fifth Erzbergrodeo Red Bull Hare Scramble win.

Finishing just over two minutes behind, Lettenbichler’s runner-up result provisionally moves him into the WESS championship lead with three rounds complete. Putting in an impressively strong ride during the second half of the race, round one winner Mario Roman was able to cement his position of third and secure a debut podium result in the race.

Also finding his rhythm after Carls Dinner, Spain’s Alfredo Gomez (Husqvarna – ESP) was able to work his way past Wade Young to eventually finish fourth. Despite holding a podium position at the halfway stage in the race, Young slipped down the leader board to round out the top five.

Graham Jarvis: “This feels amazing. I think this could be the most important Erzberg victory of my career. A lot of people were talking about my age, and at 44 I did have some doubts about my fitness for the full race. But I just kept my focus and kept pushing. I knew I would have work to do from the start, but the faster sections of the race, early on, never really suit me. Once I got to Carl’s Dinner I started to make up time. It was different to when I walked it, and I was feeling it physically, but it went really well. I managed to lead going into Green Hell, but it was close there with Manni. I just had to keep pushing after that. It’s amazing to be a five-time Erzbergrodeo winner.”

Manni Lettenbichler: “That was a tough race, but I’m super happy to finish second. I got a great start and was third behind Garcia and Walker and followed those guys into the forest. I made a small mistake, but I arrived first at Carl’s Dinner. I knew Graham was close, so I just ride as hard as I could. It was really tough in there. When Graham passed me, I did all I could to stay with him and got right onto his rear wheel in Green Hell. If I’d have got ahead of him there, well, who knows what might have happened. From there to the finish I gave everything, but I couldn’t catch Graham. I had a great race and to finish second to someone like Graham is amazing. The 25th Erzberg has been incredible, I’m so pleased to be on the podium.”

Mario Roman: “So many riders crashed in front of me on the first climb after the start, so I just tried to be calm and not make any crazy mistakes. After that I started to find my rhythm, passing riders one-by-one. To finish third is a great result, I’m very happy. In Carl’s Dinner I tried to push hard there and passed Billy, Alfredo, Jonny and Wade. I knew there was still a long way to go so I rode as smart as I could. It’s amazing to be on the podium.”

World Enduro Super Series Standings (Provisional after round 3 of 8)