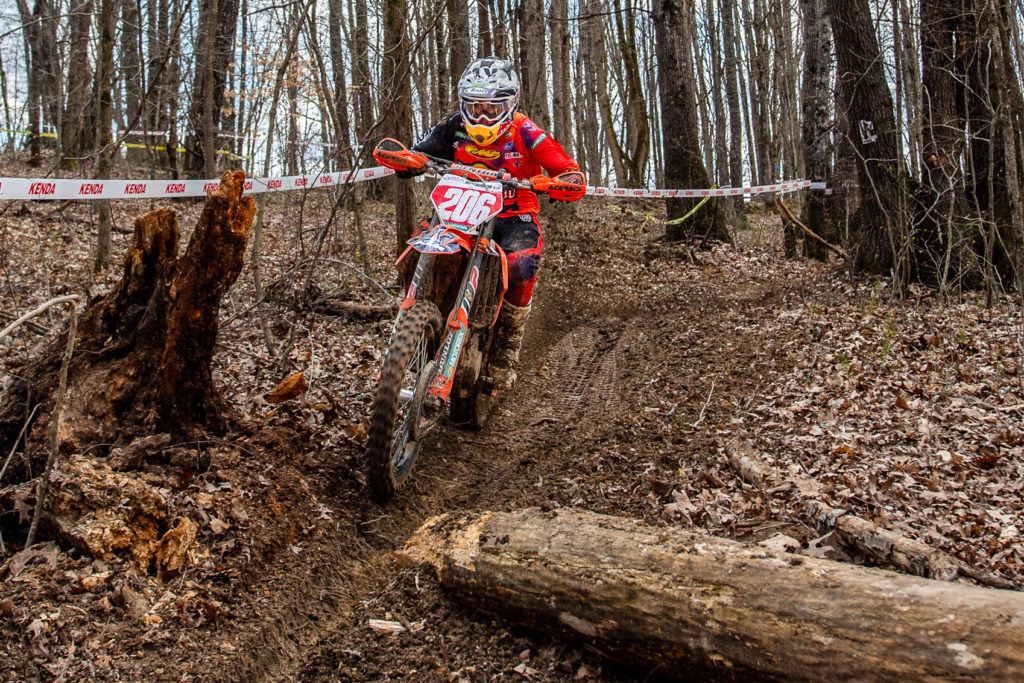 Josh Toth claimed a career-first victory in the Kenda Full Gas Sprint Enduro by posting an impressive performance at round three of the series at I-81 Motorsports Park in Greenville, Tennessee. The FMF/KTM rider won four of the 12 tests during the course of the two-day event and topped runner-up Kailub Russell by 23 seconds after two days of tight racing.

Toth won Saturday’s round by 24 seconds, and proved he was equally fast in both the Cross test and the Enduro test by winning one of each.

On Sunday, Toth won two of the three Enduro tests, and was second for the day behind Russell, however his combined time for the two days was fast enough for the overall win.

“I was pretty consistent on Saturday and I was able to get the win for the day,” said Toth. “So, on Sunday I knew I had a pretty good cushion over those guys, so I just tried to ride as well as I could, but also stay off the ground and just kind of play it safe.”

Russell came back from a rough day on Saturday to win Sunday’s round and take second overall. Russell won more tests than anyone, six in all, however a mishap in the second test on Saturday cost the FMF/KTM rider a shot at the overall.

“I got off to an awesome start in the first test on Saturday, winning the thing,” said Russell. “And I was riding really well in the second test, but right near the end I hit a rock wrong and just shot off the track. There was a fence right next to the track and I just got all wrapped up in it and tangled up. Luckily, I didn’t go over the fence. The bike was kind of tangled in-between a couple of trees and the fence. I could either give up or keep trying, so I just kept trying and plugging away and I eventually made up a bunch of time.”

Russell came back to win Sunday’s event, giving him second overall for the weekend.

“I was pleased with how I rode, because the competition is so tight at these that you just can’t give up that kind of time and still get right back in it,” said Russell. “In the end I got second overall and won the day two. Overall, it could have been worse. I’m just happy to walk away with max points on day two.”

Rockstar Energy Husqvarna Factory Racing’s Thad Duvall rounded out the podium after taking two test wins, one on Saturday and one on Sunday.

“On Saturday I wasn’t myself,” said Duvall. “I kept crashing. I think I crashed in four out of the six tests. I was very frustrated yesterday. So, we kind of made some changes on the bike last night and then it was much better day today and we won a couple tests. I just tried to clear my head last night and start over again today. I need to learn how to ride better on Saturdays.”

Coastal Racing Husqvarna’s Layne Michael came back from being off the bike for over a month after breaking his collarbone to get fourth overall.

“Technically I’m not even supposed to be riding yet,” admitted Michael. “I kind of started off a little timid, obviously, just considering everything. But I felt better progressing into the day, and today I felt like I was a lot steadier, especially [in the] Enduro test. I’ve only ridden five times coming back, so just to still be competitive in the cross test at least feels good. Just got to get some bike time under us and keep working and get that comfort back and we’ll be fine.”

Evan Smith was fifth overall on his Husqvarna/Max Motorsports/FXR FC 250, which was also good for the win in the Pro2 division. Smith won eight of the 12 tests in the Pro2 division and beat out Beta USA’s Mike Witkowski by just over a minute to claim the class win.

Babbitt’s Monster Energy Kawasaki teammates Josh Strang and Jordan Ashburn battled with each other for most of the weekend and wound up occupying sixth and seventh.

Strang admitted it was a tough weekend for him.

“Tough weekend. That’s all I can say, really,” said Strang. “I struggled with the conditions a little bit. So we’ll just brush it under the rug and go to the next one.”

Gas Gas North America’s Thorn Devlin rounded out the top 10 overall and was fourth overall in the Pro2 class.

“It was an all-around decent day for us,” said Devlin. “I made a lot of progress from the National Enduro in Florida. I had a really bad race in Florida, so we moved past that and got a fourth today. It’s progress and we’ll just keep moving forward and plugging away. So, I’m good with it.”

After three rounds of racing, Kailub Russell holds a commanding 36 point lead in the Pro class ahead of Thad Duvall. Josh Toth’s win moved him into a tie for fourth-place in points with Josh Strang, with Jordan Ashburn rounding out the top-five in the standings.

“It was a good win,” said Jones. “I like the sprint format, so I like racing these events.”

In the ProAm class, TrailPros-backed Billy Schlag scored his first win of the season, which was also his first time on the ProAm podium in 2019. Schlag, who felt more at home in the clay than the sand of the first two rounds was able to put over a minute gap ahead of round two winner RJ Cook over the course of the 12 tests. Eric Scarborough rounded out the top-3 with his first-ever Full Gas podium finish.

The Kenda Full Gas Sprint Enduro Series returns to action on May 25-26 at Hidden Valley Golf Course in Glen Daniel, West Virginia for round four of the series.