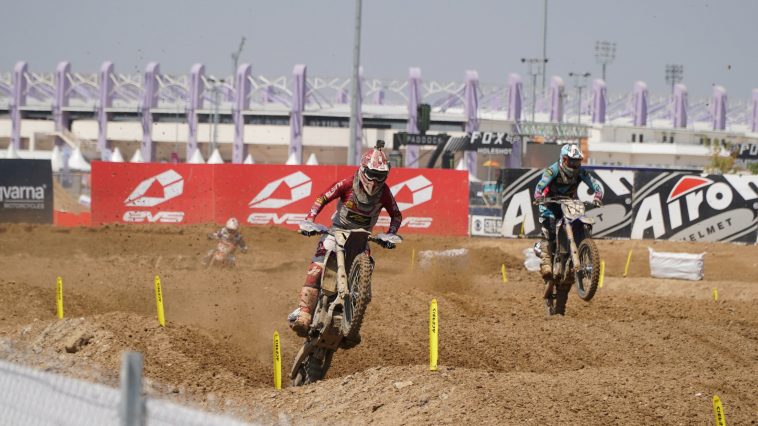 Red Bull KTM Factory Racing’s Jeffrey Herlings continues on a roll towards his first MXGP World Championship title. Today was another impressive showing from the Dutchman who did exactly what was required to win.

By lap 2 Cairoli was up to 2nd past Desalle while Herlings pulled away at the front. Monster Energy Yamaha Factory MXGP’s Jeremy Van Horebeek took 5th away from Coldenhoff on lap 4 but made no further progress.

Cairoli made his way around Gajser just after the finish while Wilvo Yamaha Official MXGP’s Jeremy Seewerwas also moving up a spot to 7th past Rockstar Energy Husqvarna Factory Racing’s Gautier Paulin. At the finish it was a win from Herlings with Cairoli just over 25 seconds back then Gajser, Desalle, and Van Horebeek.

MXGP Race 2 was led by Herlings again just after the exit of turn 2 but Desalle was the winner of the Fox Holeshot for his first time this year. Also getting around the Belgian was Paulin while his Rockstar Energy Husqvarna teammate Max Anstie fell which led to a crash from Cairoli.

A mistake from Paulin then allowed Desalle back past and into 2nd but Gajser took the spot quickly. Coldenhoff was also on a charge from 10th passing Bike It DRT Kawasaki’s Tommy Searle followed by iFly JK Racing Yamaha’s Ivo Monticelli and finally Wilvo Yamaha Official MXGP’s Shaun Simpson to take 7th.

Anstie continued to struggle but Paulin fought to hold 4th from the attacking Swiss rider Jeremy Seewer. Cairoli who at one point was back in 19th worked forward only a few spots to finish 15th.

At the front Herlings came under pressure from Gajser on the last few laps but responded to the intensity of the #243 well reopening a gap and winning by 4.6 seconds. Desalle took 3rd with Paulin and Seewer rounding out the top 5. The only difference between the race 2 finish and the overall result was Van Horebeek in 5th with a single point more than Seewer. Herlings now leads the championship by 95 points heading into the MXGP of the Netherlands at Assen in 2 week-time.

Jeffrey Herlings: “It was really awesome, the track was pretty nice, I was surprised because it developed really well. I think the organization did a good job and it was a good weekend. I’m so close and I have worked so hard so the next 2 weeks are going to be tough and I can’t wait for Assen.

Tim Gajser: “It was a good weekend, I was enjoying it, the track was nice and I felt good on the bike. 2nd overall is good and I have done it 2 weeks in a row so I am really happy and looking forward to the next one.”

Clement Desalle: “I am really happy with this podium, because yesterday I wasn’t feeling that great on track so it is good. Every time I went on track I felt better and better. Now 3 GPs in a row I’m on the podium which is consistent and it is good results for the team who are working really hard.”