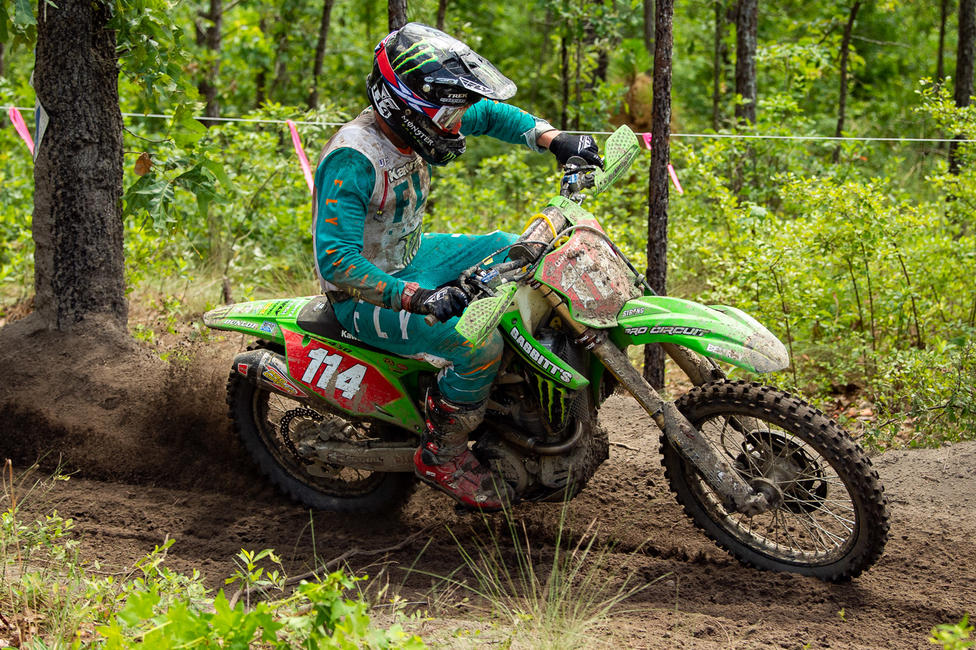 Taking his first overall win in four years was Babbitt’s Online/Monster Energy/Kawasaki’s Josh Strang coming through to meet the checkered flag first in South Carolina. Strang’s win would not come easy as he would swap the lead position multiple times throughout the three hour race with FMF/KTM Factory Racing’s Kailub Russell.

Russell jumped out to grab the early lead and earn the $250 All Balls Racing XC1 Open Pro Holeshot Award, but by the time the lead pack came around on the second lap Strang was just two seconds off of Russell. The duo would continue in a heated battle throughout the next five laps. As the white flag flew, indicating one lap left, Strang found himself 1.5 seconds ahead of Russell. Therefore, a battle for the overall win ensued, however, Russell would find some misfortunate as he found himself in a soft spot on a berm. Russell endo’ed over the bars into a fence off to the right of the track, where his bike also became entangled in the fence. Russell was able to get his bike untangled with help from his team, and finish in the second place position. Strang came through the finish line with a one minute and 34 seconds lead over the rest of the pack to earn his first overall win of the 2020 season.

FactoryONE Sherco’s Grant Baylor battled back from a sixth place start to the day to earn his best finish of the season and round out the XC1 Open Pro podium with a third overall. Baylor also had his work cut out for him as he made his way through the pack of XC1 riders. Baylor made his way into the third place position as the two-lap card came out. He would put his head down and push for the remainder of the race to hold onto the last podium position.

Finding himself in the fourth place position for the second race in-a-row was Babbitt’s Online/Monster Energy/Kawasaki’s Jordan Ashburn. Ashburn was faced with battles throughout the duration of the race, swapping between fourth and fifth place for majority of the day. After five rounds of racing Ashburn currently sits third in the National Championship points standings.

FMF/KTM Factory Racing’s Josh Toth was off to a great start as he made his way into a top three spot by the third lap. Toth battled in the third place position for majority of the race, but began to feel ill with just two laps to go. Battling himself just to finish the race, Toth would ultimately come through in the fifth place position.

Coming through in the second place position on the opening lap was AmPro Yamaha’s Layne Michael. Michael would continue to battle towards the front of the pack for the first half of the race. As the race wore on Michael found himself back in seventh, battling to get back up front. When the checkered flag flew, Michael would cross the line with a sixth place finish on the day.

After moving up to the XC1 Open Pro class from the XC2 250 Pro class it was Live It Xtreme/Kenda/Fly Racing’s Trevor Barrett earning a seventh place finish. Barrett made the necessary moves throughout the race to get himself inside of the top 10 in XC1 in South Carolina.

Phoenix Honda Racing’s Andrew DeLong finished out the day eighth in the XC1 Open Pro class. DeLong was having another great run making his way into sixth and then fifth at one point in the race, but a mechanical issue on the second to last lap put him out of contention for a top five finish on the day. DeLong remains eighth in the points standings after five rounds of racing.

Visiting from the West Coast was Three-Time Endurocross Champion, FactoryONE Sherco’s Cody Webb. As the race got started Webb jumped out to a top five start as the group made their way to the first turn. Webb would check in eighth on the opening lap. As the race wore on Webb was back in the ninth place position for the remainder of the race.

Rockhill Powersports/Ti Dezigns/UFO Plast’s Evan Earl rounded out the top 10 in the XC1 Open Pro class. Earl made his way into 10th after battling throughout the day with 3 Bros Racing/KTM/Pearson Farms Racing’s Axel Pearson, who was also visiting from the West Coast.

In the XC2 250 Pro class it was Trail Jesters KTM’s Johnny Girroir clinching his second class win of the season, along with moving himself into the XC2 National Championship points lead. Girroir had a great start, moving himself into the lead early on in the race. However, at the halfway point Girroir would find himself in the fourth place position with his work cut out for him. Girroir put his head down, making crucial passes to regain the lead for the last three laps of racing.

AmPro Yamaha/St. Lawrence Radiology’s Mike Witkowski and Rockstar Energy/Factory Husqvarna Racing’s Craig DeLong were also in the top three mix throughout the duration of the three-hour racing. Witkowski moved himself into the lead around halfway, but would face a battle with Girroir and be unable to make the pass back around him stick. Witkowski finished out the day second in XC2. DeLong would battle between the fourth and third place position throughout the day, making the pass on Enduro Engineering/XC Gear/Husqvarna’s Ryder Lafferty and rounding out the XC2 class podium at round five.

The FMF XC3 125cc Pro-Am class currently has a tentative top three with Moose Racing/Carolina KTM/XC Gear’s Zack Hayes clinching his third win of the season, and holding onto the points lead. Larsons Cycles/Fly Racing/Shoei Helmets’ Nathan Ferderer made his way into second in the class, but would face a constant battle with Raines Riding University/Yamaha Motor Corp’s Jason Raines. Ferderer and Raines would swap their positions multiple time throughout the day, but as the checkered flag waved it was Ferderer taking second and Raines holding onto third.

In the 10 a.m. WXC race it was Enduro Engineering/MEPMX/Fly Racing/KTM’s Mackenzie Tricker grabbing the Trail Jesters $100 Holeshot Award, but after a rough crash on the first lap with a fellow competitor, she would be unable to finish out the race.

BABS Racing Yamaha’s Becca Sheets along with AmPro Yamaha’s Rachael Archer and Beta USA’s Rachel Gutish would find themselves in a three-way battle for almost the entire two-hour morning race. Each one of them would find themselves leading at one point in the race, but it would be Sheets making her way into first as the checkered flag flew. Archer would remain second, holding off a charging Gutish as she rounded out the top three WXC riders.

At the conclusion of the 8 a.m. youth race it was Team Green Kawasaki’s Grant Davis coming through to take the overall win and his third YXC1 Super Mini Sr. class win of the season. Team Green’s Jack Joy battled throughout the youth race, coming through second overall and his class. Coastal Racing’s Lane Whitmer earned third overall, while also taking third in the YXC1 class in South Carolina. Coming through to earn the YXC2 Super Mini Jr. top three positions were Griere Moir, Nicholas Defeo and Caden Vick.