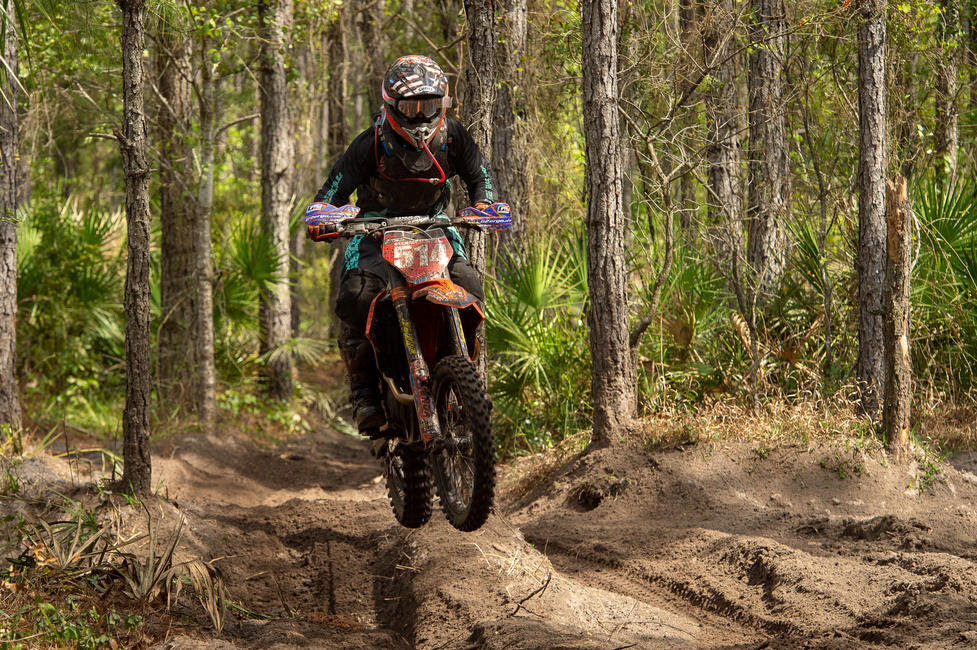 When the green flag flew last weekend, S. Baylor found himself in a favorable position as he came through in third on the opening lap. However, S. Baylor knew he had to get to the front fast and try to gap the field. This weekend will be no different for S. Baylor as he has his sights set on getting to the front, earning his second-straight win and keeping that red number plate until Steele Creek.

Russell found himself in the lead position at the beginning of the race, however at the halfway point he found himself in a battle with S. Baylor. As the pair came around on the fourth lap, K. Russell had fallen back to the second place position. As the series heads to Georgia on Sunday, K. Russell is looking to take back the number one position and take over the points lead heading into the third round.

Rockstar Energy/Factory Husqvarna Racing’s Thad Duvall had his work cut out for him after starting in the fifth place position on the opening lap in Florida. Duvall worked his way up to second place pushing for that number one spot. However, on lap four Duvall would move back to third overall, ultimately finishing in the last podium position.

Duvall’s teammate, Trevor Bollinger put in a good ride aboard his new Husqvarna motorcycle. Bollinger, who earned his first XC1 podium last season is ready to put his head down and battle this season for another overall podium finish. After finishing fourth in XC1, this weekend Bollinger will be aiming to battle with the top three.

XC1 Open Pro rookie and FMF/KTM Factory Racing’s Josh Toth had a good first round starting on the front row. Toth came away with fifth in XC1, with a sixth overall. After going down in the second corner last weekend, Toth is aiming for a better start to this weekend’s GNCC and to put pressure on the front runners. Babbitt’s Online/Monster Energy/ Kawasaki’s Josh Strang is hoping for a better finish this weekend as well after coming through in sixth in the XC1 Open Pro class. This weekend Strang will look to put his Kawasaki at the front of the pack.

Beta USA Factory Racing’s Mike Witkowski rounded out the podium in XC2, and this season Witkowski is aiming to contend for the championship. Coming into Georgia, Witkowski is looking to land on the podium once again, and run at the front of the pack to earn his first XC2 class win.

In the FMF XC3 125 Pro-Am class, Trail Jesters KTM’s Jesse Ansley earned the National Championship last season and picked up where he left off at round one this season. Ansley came through first in his class followed by Beta USA Factory Racing’s Cody Barns and Jake Froman rounded out the podium.

The Specialized General GNCC will also host the first round of the Specialized Turbo eMTB GNCC National Championship. This race will take place on Saturday, March 16 at 4:30 p.m. EST after the Pro ATV race is complete. This series is brand new to the GNCC Racing Nation, and more information can be found by clicking HERE.

The event is co-sanctioned with SETRA, a series that produces local racing events across North Carolina, South Carolina, Georgia, Florida, Tennessee and Alabama, and will ultimately bring out a full slate of local racers. All local riders are invited and encouraged to compete in the event, as GNCC Racing offers classes for riders of all skill and experience levels. The amateur race entry fee is $50 if racers pre-enter or sign up at the track. To learn more about GNCC Racing, refer to the GNCC 101 webpage.