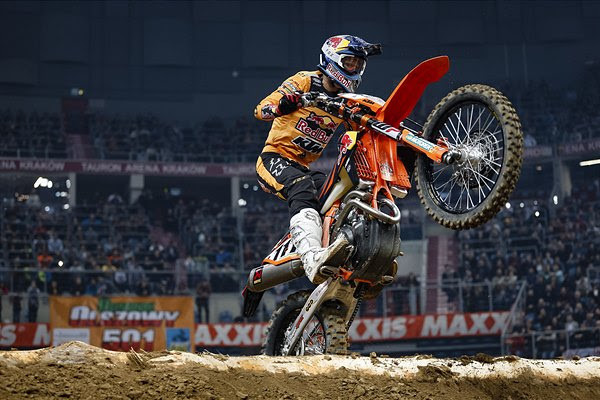 On a dry and fast track at the Tauron Arena in Krakow, Taddy Blazusiak delighted his home fans by taking the overall win at round one of the championship. It wasn’t plain sailing for the six-time champion however as an early fall in the third and final heat left him playing catch-up to the riders ahead.

With his KTM 350 EXC-F blasting off the line, Blazusiak secured the holeshot in heat one. The Polish rider was never challenged for the remainder of the race and after riding eight smooth and consistent laps crossed the line 15 seconds ahead of teammate Webb. Putting in a similar performance in the reverse-grid heat two, Taddy fought his way through the pack early on to win by over five seconds from the second-placed finisher Colton Haaker.

Aiming to take the hat-trick, Taddy fell early in the third heat and was placed dead-last at the beginning of the opening lap. Charging hard, he got his head down and proceeded to pick off the riders ahead of him, ultimately battling his way through to fourth at the line – enough to claim the overall event win and with it the championship lead heading into round two in Germany.

Taddy Blazusiak: “The whole event has been amazing. Race one went perfectly, I was able to get out in front and set my own pace to take the win. Race two was pretty much the same, I had quite a lot of pressure from the guys behind and made a couple of mistakes, but I was able to put in some fast lap times and break the challenge. In the last moto, I got a pretty good start but I got tangled up with some other riders over the first jumps and went down. I picked myself and the bike up and saw I was in last place so I took a couple of seconds to make sure everything was ok and set off again. I was pushing hard and able to overtake the guys in front quite well. I did make a mistake in one rut and washed the front again, luckily I didn’t lose too much time and was happy enough to take fourth. Championship-wise, I’m a little disappointed to lose a few points but I think we’ll all have challenging races over the season. To be leading going into round two feels great.”

With two runner-up finishes and a third-place result, FMF KTM Factory Racing’s Cody Webb enjoyed a strong start to the defence of his 2018 SuperEnduro title. After claiming the SuperPole award, the American rider fought hard throughout the three races with EnduroCross rival Colton Haaker. Despite a couple of mistakes, Webb was able to ride consistently over the three heats to take second overall, just two points behind Blazusiak.

Cody Webb:“I had great fun tonight, it’s always good to race here in Poland. I’m happy with my result, SuperPole and then second overall for the night is good – I just made a few too many mistakes out there. It’s nice to race the first round with no jet-lag but I haven’t been able to get on the bike so much in the last couple of weeks so I was maybe a little timid out there. I know my speed is good and my fitness is nearly there now after my injury earlier in the year. I’m excited for the rest of the season so we’ll see what round two brings in Germany.”

The 2019 FIM SuperEnduro World Championship continues with round two in Riesa, Germany on January 5, 2019.