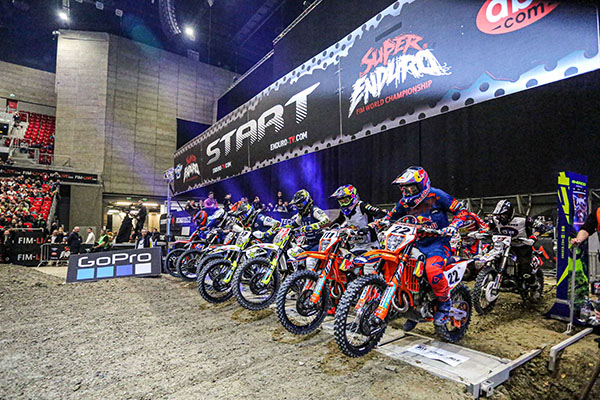 With the escalation of the Covid-19 crisis in the last week, and after careful consultation between the FIM, ABC Communication and Polish organiser “Sport Up“, the decision has been made to officially cancel the 2020 SuperEnduro season finale.

Initially scheduled for Saturday March 14th, the 5th round which was due to take place at the Atlas Arena in Lodz is therefore cancelled and the results of the Championship will now be taken from the penultimate round of the calendar, which was the Hungarian Grand Prix on February 1st.
With that, Billy BOLT (GB – Husqvarna) is your 2020 Prestige World Champion while Teodor KABAKCHIEV (BG – KTM) is crowned in Junior.
But in agreement with ABC Communication and the FIM, we can still enjoy the great atmosphere in Lodz as the GP of Poland will open the 2021 season, on December 12 2020!

Bastien BLANCHARD, ABC Communication: “With the growing threat of the Coronavirus in Europe, it is impossible to know when ‘normal life’ will resume. This is why we made the difficult decision to cancel this final round completely. But we are glad to have reached an agreement with “Sport Up” and the FIM which means the opening race of next season can be in Lodz! It’s a shame that this 2020 season has not had the grand finale it deserved, especially after the first four GPs were incredibly exciting and offered a great show for all our fans. But health must take priority, and the only sensible thing to do is take the Championship Standings from the Hungarian GP. We now must look forward to a great season and even more excitement in 2021, we are already working on the calendar – which we hope will be released as soon as possible!”

The final results and standings for the 2020 season will be released soon.