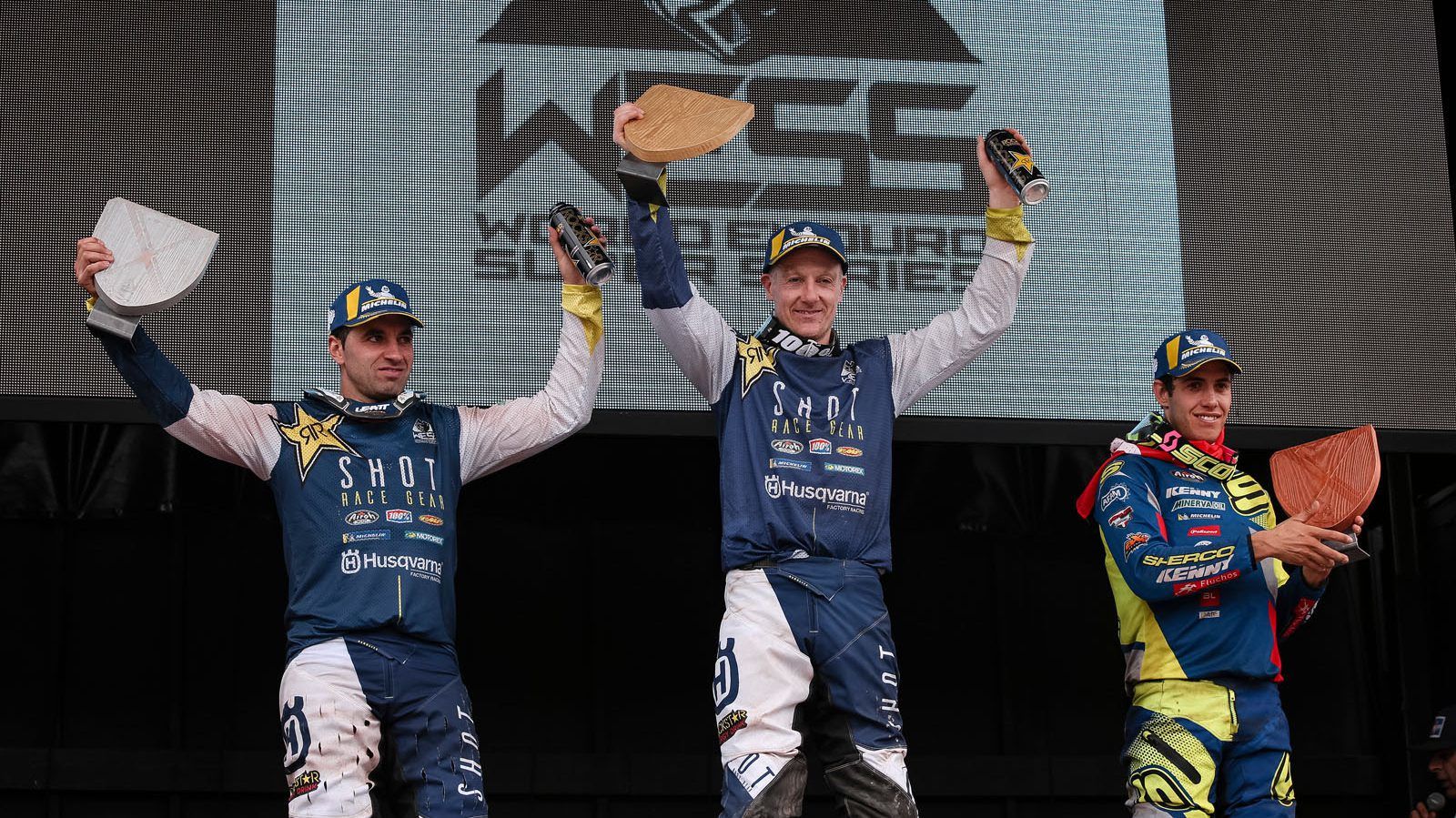 Britain’s Graham Jarvis (Husqvarna) has claimed the overall win at Spain’s Hixpania Hard Enduro, round four of the World Enduro Super Series. Making it back-to-back victories in this year’s championship, Jarvis’ podium-topping ride also sees him become the new leader in the race to become this year’s ULTIMATE ENDURO CHAMPION.

In what proved to be a hotly contested battle, it was Sherco Factory Racing’s Mario Roman (ESP) who narrowly beat Jarvis for the win in Sunday’s Mitas Lost Roads Hard Enduro race, securing him an overall podium result of third. Event leader Alfredo Gomez (Husqvarna – ESP) placed fifth in Sunday’s race, slipping to second in the event’s overall classification.

The third and final day of racing saw the 70 riders who qualified through from Saturday’s Campoo de X-Treme race tackle the tough and demanding Lost Roads Hard Enduro. During the two-hour 30-minute race, a short-course laid out around a challenging quarry and surrounding forest pushed competitors to their limits.

A Le Mans style start saw riders race on foot to their bikes, which were located in a cave. Roman was first to enter with Taddy Blazusiak (KTM – POL) hot on his heels. The duo swapped and changed the race lead during the opening two laps as everyone settled into the rhythm of the race.

Knowing that only a top-two result would suffice if rival Gomez were to place fifth or better, Jarvis determinedly worked his way towards the front of the field. With one hour to go both Jarvis and Roman had broken clear of Manuel Lettenbichler (KTM – GER) in third. Battling closely, they entered the final lap wheel-to-wheel.

Roman managed to edge clear slightly as they entered the finishing arena, however a mistake on a downhill allowed Jarvis to momentarily regain the lead. But Roman was eager to impress his home crowd and fought his way back in front to power up the final climb for the final day’s race win.

Although losing the battle, Jarvis ultimately won the war, with second place enough to give him the overall Hixpania Hard Enduro win and with it move to the top of the championship standings.

Entering the final day of racing having won the previous two days, Gomez was unable to respond to the attack by Jarvis. Admitting to struggling early on, he could only finish fifth for the runner-up result.

The World Enduro Super Series continues with round five at Red Bull Romaniacs in Romania on July 30 – August 3.

Graham Jarvis (Husqvarna – GB): “What an event and it’s crazy to think I’m leading the WESS now. I’m not going to get too excited just yet though and my plan is to take each race as it comes. Romaniacs is going to be the game changer – hopefully I can at least finish it this year. It was a tough race today I was still tired from yesterday – it was fast but there were still some technical bits. I think everyone was really feeling it and I know I was on the limit today.”

Alfredo Gomez (Husqvarna – ESP): “I tried to push as hard as I could today, but just ran out of strength in the last half of the race – no power at all. All I could do was to keep on going, try not to crash and stay on the bike. It was great fun racing out there with all the home fans cheering. I’m sorry I couldn’t bring home the win for them but overall, I am happy with how the race has gone and I gave it my all. Congratulations to Graham, he did it again.”

Mario Roman (Sherco – ESP): “It feels amazing to take the win in the final race. I had such a tough time yesterday on the Cross-Country, crashing six times and bending my handlebars. Despite that I still pushed hard and managed to finish fourth. Today, I wasn’t thinking too much about points, I just wanted to take the win. Graham was really strong and all the others were right up there at the beginning. Halfway through I was thinking it’s not possible to keep going for another hour-and-a-half, but I kept going and we did it. I don’t know how many fans came out to watch the race and cheer on the riders, but to hear them all shouting my name made it possible to keep going and finish the race, so thank you very much to them.”

WESS Championship Standings (After Round 4 of 8)